Boycott swearing in and you will be dropped as MP 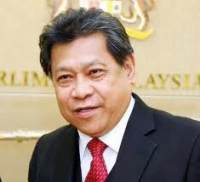 Pakatan Rakyat (PR) elected representatives will be dropped as MPs if they choose to boycott the swearing-in process, Dewan Rakyat Speaker Tan Sri Pandikar Amin Mulia warned today.
Pandikar said should the opposition bloc refuse to participate in the procedure, he and his deputies will shun their appeal to be sworn in later, which would lead to their eventual discharge as MPs.
“If you do not come on the first day, is it not an insult (to the parliamentary process?) If they want to do that then we can boycott their swearing in.
“If they can boycott the democratic system, we will boycott their swearing in,” the House Speaker told a press conference after giving his opening speech at the 13th Parliament Sitting briefing session.
Pandikar said the Federal Constitution states that any lawmaker who misses the swearing-in process without valid reasons will be automatically dropped in six months.
The Standing Order also states that the swearing in cannot take place beyond the stipulated time, which is the first day of the sitting.
PR anchor party PKR had recently suggested that the opposition snub the swearing-in process in protest against alleged fraud in Election 2013.


The mainstream media, however, published reports claiming that the opposition coalition had decided to proceed with its plan to shun the sitting although PKR vice-president Chua Tian Chang later clarified that no official decision has been taken as of now.
Pandikar blasted the suggestion as an insult to parliamentary democracy and the Yang di-Pertuan Agong, saying this was the first time such an idea was being mooted since independence.
“It is a mockery to the Yang di-Pertuan Agong and parliamentary democracy. Never has this happen since independence,” he said.
The Speaker added that if the opposition proceeds to shun the sitting “in the name of democracy”, he and his deputies can also use the same excuse to snub their swearing in.
PKR’s allies DAP and PAS have openly voiced their objection to the boycott idea and said that there was never any consensus to shun the swearing-in process.
“As far as the DAP is concerned, we will be attending the swearing in. There was no decision to boycott in the past meeting,” party central executive committee member Anthony Loke told The Malaysian Insider.
PAS central working committee member Khalid Samad said his party disagrees with the suggestion and said it was akin to betraying the voters who entrusted them with the task of carrying their voice in Parliament.
“I think the rakyat voted us in irrespective of the fraud so we must respect the trust given so that we can carry our voice in Parliament,” he told The Malaysian Insider.
The second-term Shah Alam MP had also criticised the proposal as illogical and “dramatic”, adding that those who made the suggestion “are not looking at the big picture”.
Minister in the Prime Minister Department Datuk Seri Shahidan Kasim echoed the view that a boycott of the swearing in was tantamount to betraying the trust given by voters.
Posted by Admin at 5:05:00 PM