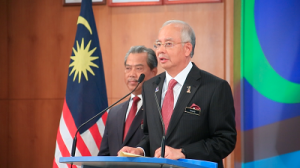 This means that Joseph Entulu who was appointed Minister in the Prime Minister’s Department and Joseph Salang Gandum, a deputy minister, will not accept their posts.

A miffed Salang had in fact already earlier rejected the position.


Parti president James Masing said majority of the party’s supreme council members had agreed to reject Najib’s offer and felt that they were “sidelined” and “deserved to be treated better.”

PRS had delivered six parliamentary seats to Barisan Nasional’s 133 seat tally. They did better than some BN parties in peninsular who were suitably rewarded.

Without mincing his words Masing warned Najib not to toy with PRS and Sarawak Progressive Democratic Party (SPDP) which had been totally ignored despite delivering four parliamentary seats.

“Don’t try to sideline us because we have the support of the rural people. It is not a warning.

“It is a fact, in case they don’t understand that we have six seats and four from Sarawak Progressive Democratic Party (SPDP).

“PRS and SPDP which are rural-based parties are not properly treated by the present government.

“The rural areas in Sarawak are Barisan Nasional ‘fixed deposit’. If you don’t take care of it, somebody will come by and withdraw it,” warned Masing.