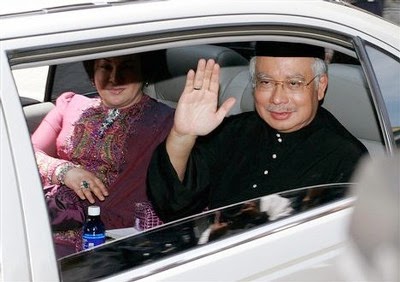 Malaysian Prime Minister Najib Tun Razak is due to return from his two-week holiday on Friday, presumably tanned, rested and ready to resume command.
In the midst of a national crisis over the shooting down of Malaysian Airlines Flight MH17 over strife-torn Ukraine, Najib went to the Netherlands on Aug. 1 for a press conference that won him praise across the world. He was given credit by international agencies for his deft personal maneuvers behind the scenes with Ukrainian rebels in the attempt to reclaim the bodies after the doomed airliner was shot down over disputed territory on the Ukrainian-Russian border on its way from Amsterdam to Kuala Lumpur, killing all 283 passengers and 15 crew on board.
From there, he went on holiday, with no public record of where he might have gone. Requests for information from Najmuddin Abdullah, Malaysian Airlines’ public relations head, on the premier’s travel arrangements met with no response. But other sources say while there had been requests for the Prime Minister to fly about Malaysian Airlines to demonstrate his confidence in the national flag carrier in the wake of the horrific incidents that took the lives of hundreds of people, he and his wife, Rosmah, flew on a private jet. It isn’t known who owned the private craft.


“He has never flown on either MAS or AsiaAir in seven years,” a political observer in KL said. “Mahathir did, Abdullah Badawi did. But Najib has never once flown on either one.”
Requests by email, telephone and text the prime minister’s personal aide and press secretary, Azlin Alias, asking for the prime minister’s holiday itinerary also went unanswered.
But after the press conference, according to well-placed sources in Malaysia, the prime minister and his wife Rosmah Mansour flew to Paris. They were reportedly joined by Chinese playboy Taek Jho Low and the former prime minister of Qatar, then are believed to have gone on to Sardinia in Italy, to Cannes on the French Cote d’Azur, then back to Sardinia with what was described as a large entourage of Chinese Malaysian tycoons. From Sardinia, the group flew to Rome before returning to London.
Low, better known in as Jho Low New York café circles, has made the New York papers for partying at exclusive clubs with Paris Hilton and other blondes and a flock of entertainment figures, cracking open bottles of Kristal champagne. He has been closely tied to Rosmah, traveling with her on New York café scene jaunts. He has been closely involved in the 1MDB sovereign wealth fund.
“It’s the talk of the town in Kuala Lumpur,” one source said, “but nobody wants to publish the story because the PM’s office isn’t talking. It was a holiday planned some time ago, well before the tragedies. Yet, it would have been prudent to postpone it given all the things the country is going through.”
One of the major things the country is going through is a full-blown political crisis centered in the three-party Pakatan Rakyat opposition coalition that has stalled government in the country’s most populous and richest state. Residents complain that the lack of attention to duty has meant that garbage has gone uncollected and other governmental problems have piled up.
In addition, Kuala Lumpur and its environs are in the middle of a drought that has produced the worst water shortage in decades. While the politicians battle it out, residents are complaining that the government has done nothing to alleviate the shortage.
There is continuing dispute over who actually shot down MH17 – Russian-backed rebels or Ukrainian regular troops. It has become an international squabble in the Malaysian press, with some factions accusing the Ukrainians and charging that the Americans had fomented the Ukrainian break with Russian that precipitated the crisis, ultimately blaming the Americans for the tragedy.
MH370, lost in the early hours of March 8, has become the biggest mystery in aviation history. The plane, with 227 passengers and 12 crew, mysteriously left its flight path for Beijing, turned east and disappeared somewhere over the Indian ocean. No trace has ever been found – no floating wreckage, nothing. Between the two of them, more than 500 people are dead.
John Berthelsen is the editor of Asia Sentinel
Posted by Admin at 10:34:00 PM

Email ThisBlogThis!Share to TwitterShare to FacebookShare to Pinterest
Labels: Najib